Properties purchase is accelerating its increase, only decreasing in four regions 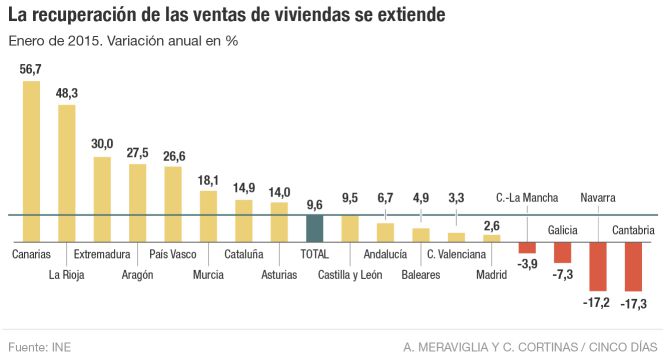 Homes sales are slowing consolidating a recovery month by month, according to INE, the Spanish Statistic National Institute.

Last January 33.416 properties were sold in Spain and even if figures are still low compared to other moments in time, they are still the highest since February 2013. To this concern they represent a 28,5% increase over the previous month operations and, most of all, a 9,6% increase over January 2014 transactions, “not being January a traditionally positive month for homes selling” a real estate agent reminded.

Another factor emphasizing this strong recovery is that the January increase has been the fifth consecutive rise, driven again by the resales reaching an extraordinary  50,8% over the same period in the previous year. Resales represented the 73,1% of all selling operations, while new homes sales equaled 26,9% of all transactions, due to poor new constructions projects that is still affecting the market. During the first month of 2015 only 9003 new properties were sold, 37,1% less than previous year.

INE remarks that the latest spread data correspond to sales transactions recorded on the land register for operations registered in previous months. In any case, although a time gap exists, the statistics elaborated by notaries and the Ministry of Development (using its data), which lack the mismatch of dates, show the same tendency towards a clear increase in the purchases. The recovery of employment and the reopening of credit, together with remarkably lower prices, explain the higher number of transactions.

If we consider the type of properties, the majority of sold houses in January, speaking of the 88.8%, were sold at a free price. This type of sales reached 10,4% on yearly basis, summing up to 29.667 transactions. On the other hand, purchasing of social housing (VPO) reached up to 3.749 operations, increasing 3.3% over January 2014. Another important issue to consider when evaluating a sustainable market recovery is the extension all over the country. At the beginning the positive trend of home sales only affected a minority of regions (those with higher income and a bigger touristic presence), now the situations seems to be reversed. Considering absolute terms, Andalucia is still at the top of home sales in January with 6.114 operations, followed by Madrid (5.282), Catalonia (5.219) and the Valencia Region (4.630).